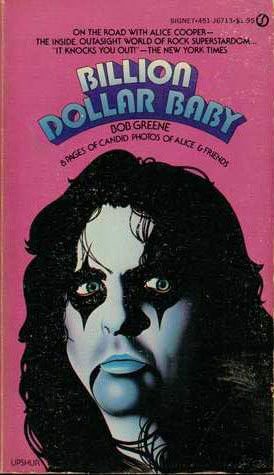 Bob Greene was the author of the book 'Billion Dollar Baby', one of the essential reads for an Alice Cooper fan if you can find copy. It's been out of print for decades and copies now go from ridiculous amounts of money. Greene travelled as a member of the 'Alice Cooper' band during the 'Billion Dollar Babies Holiday Tour' of '73 and also played the part of Santa at the end of the shows. The book is probably the closest that anybody not on the tour could get to knowing what it was like to be with Alice Cooper during the height of his/their success. It starts out in the studio with Alice putting the final touches to what became the 'Muscle Of Love' album, through rehearsals, and onto the road, vividly showing a band on the brink of disintegration. You meet all the main players of the tour see how the pressures within the band were taking their toll.

Greene was a highly respected columnist for the Chicago Tribune at the time, and had written previous articles about the band. He won the 'National Headline Award' in 1977 and occasionally made TV appearances, eventually landing a regular slot on ABC's 'Nightline'. In 1995 he was named 'Illinois Journalist of the Year' and was awarded the 'Peter Lisagor Award' for public service journalism.

In 2002 he became a news story himself when he was forced to quit the Chicago Tribune after admitting to an "unconsummated extramarital sexual relationship with a high school student". The 17 year old (legal age at the time in Illinois) girl had visited Greene at work for a school project and became the subject of one of his columns. In the months between their first meeting and an encounter at a hotel she had graduated high school, and Greene later described the event as "a sexual encounter that stopped short of intercourse". Despite technically not breaking any laws the scandal destroyed Greene's newspaper career, although he continues writing books.

Greene's experiences with Alice Cooper were parodied by comics writer Steve Gerber in the background of the villain 'Dr. Bong' in the 1970s Marvel comic 'Howard the Duck'.

Alice has suggested that the band staged certain events for Greene to write about, and Neal and Dennis have stated that Greene only wrote about the negative things said, deliberately leaving out the positive comments, but even so, the book is a good reference point for this period. It can also be said that while there were many reasons behind the band not reconvening after 'Welcome To My Nightmare', the book probably played it's part as well.

"You know, I liked Bob Greene a lot, his writing style, and when the band came through Chicago early on he came down to the studio because he was going to write an article for the 'Chicago Tribune', which he did. The the guys had finished everything and I was just doing re-doing some bass tracks, so it was just me in the studio, and he wrote all about this guy in pink corduroy pants that perhaps needed to be washed, and hair down to his waist, and it was very descriptive and I really liked it not just because it was about me, but because his detailed description really captured the moment. And then when he went on tour with us on the 'Billion Dollar Babies' tour he was a good friend, I liked him, and I like the style of the 'Billion Dollar Baby' book, it's just I thought it leaned heavily towards what was going wrong at the time, and it overlooked portraying all of the.. You know the band, even in our bleakest times, we still basically had a lot of fun together, and I think that was left out of the book, so that would be my criticism. It's a great rock book, even though it didn't have that perfect balance of good and bad."

Bob Greene wrote a very slanted book. His entire book is written with the premise that Greene is going to "expose" Alice Cooper to the world, and finally let everyone know that Alice Cooper is really just a put-on. But at one point in the book, he quickly inserts:

"Still, on measure, such flashes of moroseness from Alice as Rebecca had noticed were the exception. They were noticeable mainly because they contrasted so sharply with his standard persona - the joking, jabbering, laughing, wise-cracking kid who doesn't want to think about growing up, who would rather stay a punk for the rest of his life, if he had the choice. That was the Alice that remained visible most of the time - and since he was the star, that was the tone the tour took on most of the time."

So, what Greene is really admitting is that Alice really was the wise-cracking kid most of the time. And yet he never really provides any such scenarios in his book. Instead, he details in full, every scenario where Alice is "morose". This is incredibly unfair and slanted when Greene, himself, admits that these "flashes of moroseness" were the exception. So with respect to Greene's book, the following questions arise: If Alice's "morose" moments were the exception, why are they the gist of Greene's book? Also, if Alice's wise-cracking persona was "visible most of the time", then why aren't there any such scenarios in Greene's book? So, in essence, with this one paragraph inserted in the book, Greene is admitting that he is overblowing the "exceptional" events and ignoring the majority of the time where Alice really was the "joking, jabbering, laughing, wise-cracking kid who doesn't want to think about growing up, who would rather stay a punk for the rest of his life, if he had the choice". Essentially, Greene is admitting that his own book is very slanted.
(Susie Spears, October 1996)

I think most everyone agrees that it is a really well written book. But I don't think that someone like Greene can be thrust into a situation like the 'Billion Dollar Babies' tour and give much more than just a reporter's point of view. I know that I have seen things happen on tours that if an "outsider" were to witness them, one would think that everyone on the tour hated each other and that everyone was ready to quit. It would be like walking into the middle of a family argument which wouldn't necessarily represent what that family was like all of the time.
(Renfield, November 1997)

Glen Buxton famously signed one copy of the book "Eat dog shit Boob" which sums up his opinion of the book.


You can try the links below in case Amazon have a copy, or just laugh at the prices.