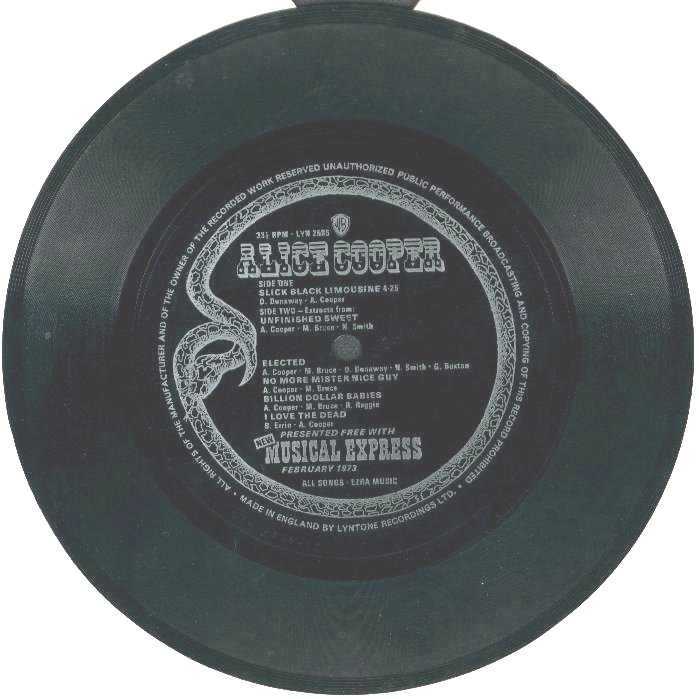 This track, written by Dennis Dunaway, was given away free as a flexidisc with New Musical Express (issue dated February 17th 1972. It was recorded during the 'Billion Dollar Babies' sessions especially for this release. Alice Cooper had done extremely well in the N.M.E. reader's poll that year and the Cooper's thought it would be nice to do something to say thank you. There was no time to do a show, so the flexidisc was used. It's a rock'n'roll type song and very different from the usual band sound. Touring guitarist Mick Mashbir played additional guitar.

This came out of us joking around about the blues. AC was calling himself Blind Lemon Chicken Cooper. As I remember this was done just for fun in one take[ must have been at least two as there`s an alternate take on the B$B-Deluxe reissue]. I don't think there was any intention of it ever being on B$B, maybe as a "b" side for a single.

ALICE COOPER calls a temporary halt to rehearsing his new stage show in the ballroom of the band's Connecticut country mansion. Pausing just long enough to rearm himself with cans of Budweiser, he hops into the backseat of his chrome speedwagon and makes the long haul through heavy traffic to his New York City H.Q....

And now he's reclining in his poster decked office. Before him is an ever-ready can of beer, the centre-fold of the recent NME Readers Poll, and a box containing the returned master-tape of a brand new Alice Cooper single. Three words, "Slick Black Limousine" reveal the contents. On the rock share index the price for an Alice Cooper single is well over a million dollars. And sales of sheet music, copyright, etc., could quadruple the figure. However, the mogul of mascara and melodrama didn't redeem that master-tape for such a lucrative sum. He gave it away for nothing -- exclusively to NME readers via last week's issue.

It's not that the pressures of being the 20th century schizoid man-woman have reached a critical point and damaged Cooper's brain cells. On the contrary, it was his way of showing gratitude to his followers. "When we learned that we'd topped three sections in the NME Readers' Poll" he told me, "we wanted to give something in return -- something positive and direct. "Unfortunately, there wasn't time for us to play a concert in Britain, because we're up to our necks preparing the new stage show for our three-month American tour." (It opens up on March 5.) "So we got real drunk one night and said, 'Hey let's send them a record. "But we didn't want to send something already on an album, or due for release very shortly. It had to be something new and exclusive."

"We'd always thought that it would be a real goof to do an Elvis-type thing. Yer know, all grease 'n' echo ... a real boppin' rubber-legged knee-trembler. "Well it so happened Dennis (Dunaway) had written 'Slick Black Limousine', which was that sort of song, but there was no room on the new album for it and we'd already fixed up the next single. "So we laid down the backing track at the mansion and put the vocal on when we were in London."

Alice explains that "Slick Black Limousine" is more than a good natured send-up of the Hillbilly Wild Cat. "I don't always wanna be known as Alice Cooper the snake charmer. I want to expand the whole Alice Cooper idea. I want Alice to be a lot of other things. On this particular record, it's Alice Cooper -- greasy rocker."

'Slick Black Limousine' expands the whole concept of the Elvis thing, and at the same time it expands what Alice Cooper is really capable of doing. And this is just the beginning. 'Limousine' is our idea of Elvis in ahead-on collision with drummer Sandy Nelson."

Though fidgety due to having been off the road for over two months, the Connecticut crooner is still in the best of spirits -- something not wholly due to his fuel intake of Budweiser. It takes little probing to discover the deep-rooted satisfaction Cooper and the band have derived from the results of the NME poll. "The thing that's really made us all happy", says Alice, "is that we're now accepted on a musical level. Both this and the sale of our records have proved that beyond any doubt. We've passed through the period when most people thought of us as being nothing more than a hype-gimmick."