Alice has appeared on hundreds (thousands?) of TV shows over the last 40+ years. He belongs to both the SAG and AFTRA actors associations. A full list of every TV appearance is next to impossible as he's made so many but some important/interesting appearances do have their own pages (above) and below are some general comments on a few other TV shows and related stuff:

Generally speaking guests on TV shows don't get paid, as they are there to promote whatever product they're currently working on. However there are occasionally exceptions. If you want to use Alice as the example, he got paid what is called "union scale" for something like 'The Tonight Show' as he is a member of AFTRA (TV and radio union). It's something like between 5 and 6 hundred dollars, I think. The Tonight Show is an entertainment, performance show so you get paid.
There have been a few talk shows in Europe that have paid Alice a considerably large amount to be a guest on their show.
Appearances on a show like 'Something Wilder' can vary. Sometimes they offer something like double the union scale or sometimes a very large amount.
For something like 'Entertainment Tonight' there is no payment, as it is considered a "news program.
Newspaper and magazine interviews you never get paid for (although, something like the article Alice wrote about Spinal Tap, he did get paid for).
(Renfield June 1998) 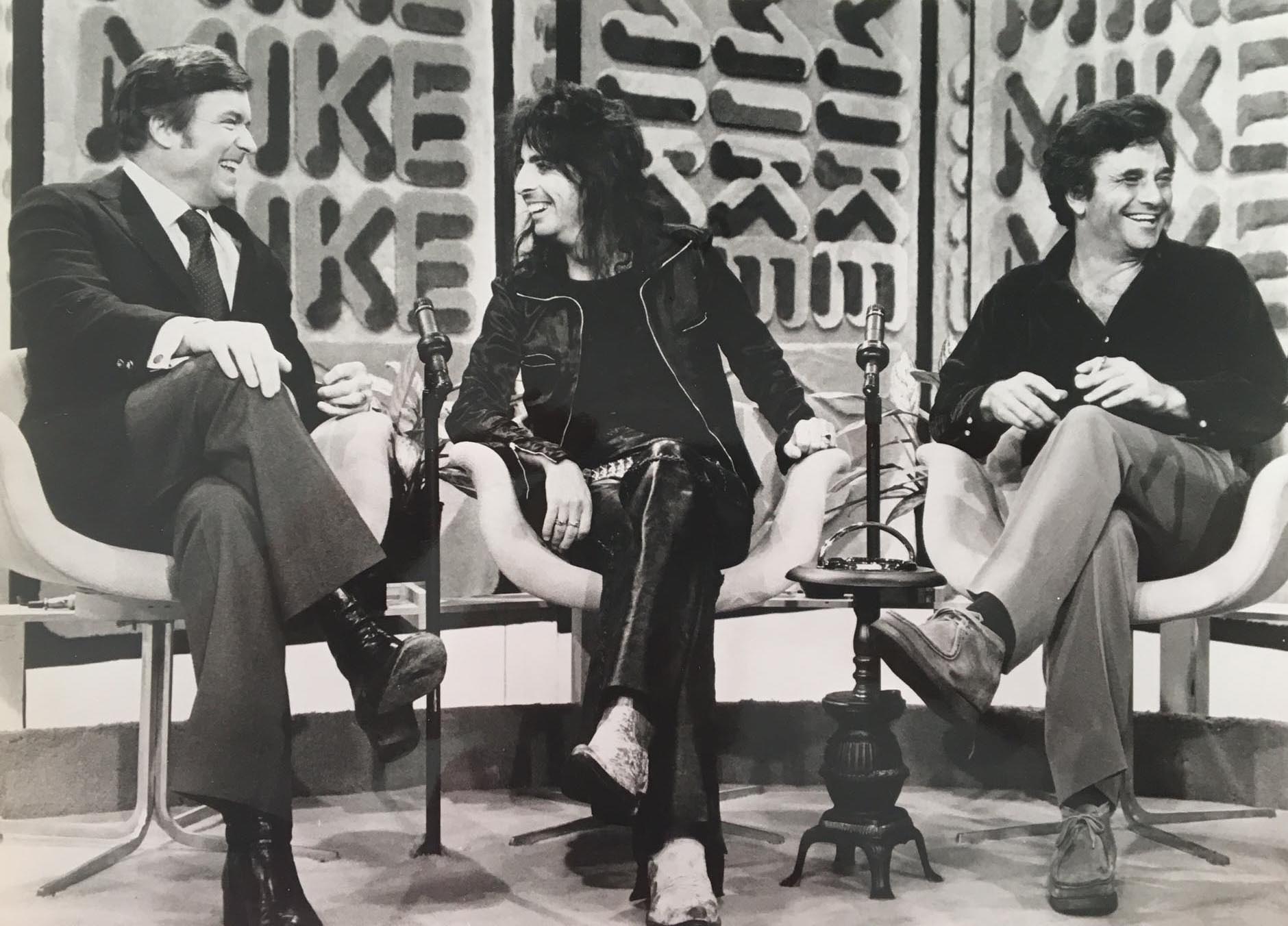 Alice appeared on the 'Mike Douglas Show' on 2nd January 1975 and 7th August 1975 (video clip only on this one). On the January show, the other guest was Peter Falk, famous for portraying Detective Columbo on the long running TV series. Alice came on after Falk and was wearing a necklace that had a glass eye on it. There was a subtle tension as Douglas asked about the piece of jewelry (Ghoulry). Falk HAS a GLASS EYE! Alice said it was an accident and apologized after the show.

Alice was also seen playing golf on the show.. a sign of things to come.

Alice did appear on 'Hollywood Squares. More than once in 1974. Here's a piece from the sleeve notes to the 'Life And Crimes OF Alice Cooper' box set' (copyright 1998 - Warner Bros. Records. Courtesy of Renfield, February 1997):

This was the setup for the King Of Shock Rock's sickest, most horrifying role. It wasn't played out before tens of thousands in a sports arena, however. Rather, it was enacted before a television audience of millions when Alice Cooper showed up on a couple of episodes of the Hollywood Squares game show.
Ironically, this was Alice at his most subversive. Most fans, however, didn't get the joke, and some "rock historians" still regard this as a low point in Alice's career.
The punch line to these appearances, of course, was that by now there was truly no escaping Alice. No matter where you went, there he was. Parent who screamed at kids to turn down their Alice Cooper albums now themselves couldn't avoid the rock star--not even in the sanctuary of their favorite TV show. After all, what could be ironic than some prim housewife with a hate-on for the long-haired freak now finding herself in his debt for enabling her, through the right answer, to win the show's grand prize?
by Jeffrey Morgan

Alice appear on an episode of 'The Soupy Sales Show' in 1978 in a sketch about a singing, piano playing ant. He agrees to take the ant out on tour with him only for it to get squshed just before the contract is signed. He then gets a pie in the face!! The episodeis available on 'The Soupy Sales Show Volume 2'.

Alice had cameo on the February 12th 1997 in episode 17 of CBS show 'Pearl', called 'The Write Stuff: Part 1', staring Rhea Perlman from 'Cheers'. He appeared as a guardian angel. The show also featured Malcolm Mcdowell.

Alice appears briefly in one episode of the cartoon series 'Space Ghost' called 'The Girlie Show'. The theme of the show was women in entertainment and of course the joke was Alice is not a woman.

'Something Wilder' was a short lived sitcom staring the legendary Gene Wilder. Alice appeared on episd 14 of the show which aired on NBC, March 14th, 1995. He plays a rock star who moves next door to the Bergmans and films a music video, threatening the homespun image Gene (Gene Wilder) had hoped to adopt in a new tourist campaign for his town. Alice performs a short piece called 'It's Stockbridge'. The words go something like:

In the season 2, episode 4 edition of 1994 MTV show 'The State', a comedy sketch show similar to 'Saturday Night Live', had a sketch called 'The Writer'. This writer at a newspaper is having trouble capturing his thoughts on a big story. A co-worker suggests that he use conjunctions. The first guy has never heard of them, and asks for an example. The second guy says "well... 'and' is a conjunction. Like coffee and doughnuts". Well the writer is so happy he just runs around using "and" as much as possible. He is walking down the street saying "and" about everything. It goes a little something like this: "A car and a lamp post and a building and a trash can and Alice Cooper and..." As he says "Alice Cooper" who should walk by but Alice himself! He gives the fellow a strange look and keeps on going.

Alice appears on Episode 315, 'Radio Daze', of 'That 70's Show' which was first transmitted on February 7th, 2001. Alice is scene at the end of the episode playing dungeons and Dragons! There is also a show soundtrack album featuring 'Under My Wheels' (album version)

In 1999 Alice featured in a short horror film called 'Freakshow', which he introduced and provided the voice of a pumpkin called 'Pirate Jack'. You can actually see 'Freakshow' for free at IMDB.

Alice appears briefly in this US TV series in 2006, in episode two of the fifth season entitled 'Mr. Monk and the Garbage Strike'.

In the show detective Monk has a theory Alice, who apparently collects antique furniture, killed someone to get an especially rare chair, but when he shoots the owner while he's sitting in the chair, the bullet hole and blood make it worthless so he leaves it behind. Of course it turns out not to be true.

It was rumoured during the '70s that Alice would be appearing in the US sitcom 'All In The Family'. This never eventually happened.

Alice now has this huge projection screen TV that is so big it was actually used as a video monitor for a show production that was touring theatres. You press a button and the screen comes down from the ceiling. Very Bond. He's very big on all the new Star Trek crap. Also, Larry Sanders. But he goes out to the movies A LOT.
(Renfield, July 1995)

Alice travels with a portable TV with a built in VCR and a suitcase full of prerecorded videos.
(Renfield, May 1996)

In 2006 it was announced Alice would voice the character of 'Psalmanazar' in a new "HD CGI sitcom animation" series called 'Hungry Hamsters', which would also include Brian Blessed, Jack Davenport and Harry Hill. Producer Nick Sercombe commented that Cooper was selected for his dry wit as well as his performing talent. "Alice has already made some amusing suggestions as to the visual design of his character, 'Psalmanazar', and he is really looking forward to getting into the studio next year to record his voice," he said. "All the 'Hungry Hamsters' voices have been chosen carefully for their colourful characters and now we have added the enormous theatrical talent of Alice Cooper, which is a real bonus."

While the show was never completed some images did appear including one of Alice's character. After the initial announcement I don't recall Alice ever being mentioned again in relation to the project, and his character wasn't in any further images from the show. An 'animation test' can be seen on YouTube, but with no Alice, and there was an official webste but it's long gone now.

In March 2013 another animated project began called 'Uncle Alice Presents..". This appeared as a kickstarter project created by Tom Sheppard and wasfully backed by Alice himself. Starting with a 12 issue comic book series, with the hopes to eventually make a TV series, the stories were compared to classic anthology series like EC comics and 'Tales From The Crypt' but all featured Alice in some way as the 'gatekeeper to the netherworld'. Several promotional videos were made but in the end the Kickstater campaign didn't reach it's goal and nothng more was heard about it. You can still see the site at Kickstarter, and the videos are also on YouTube.

Mickey and the Roadster Racers

In 2018 it was announced that Alice would be voicing a character in Disney's 'Mickey and the Roadster Racers' but it took nearly a year before the episode was finally shown on July 5th 2019. It was titled 'Goof Quest' (season 2, Episode 24a) and featured Alice voicing ‘Alistair Coop De Ville’.

In 2020 Alice voiced "Windy Pete" for this NickJr cartoon aimed at very young children. It was episode 5 of series 5 and was called 'Ocean Patrol'. It first aired on January 3rd.

From 'The Book Of Rock Lists', published originally in '82 by Dave Marsh.

Alice LOVES all the new Star Trek crap. He isn't in any Star Trek movie but he has let it be known that he would love to be a Klingon in one of them.
(Renfield, October 1995)

Alice is a HUGE fan of 'The Prisoner', I don't think the balloon thing [at the end of shows] came from the program but it's a good question.
(Renfield, December 1995)