In early December 1981 Alice and the band shipped out to Paris, France to record a special TV show. Produced by Nightmare Inc., A2 and V.T.F. the show consisted of a series of clips featuring various songs with the emphasis on 'Special Forces'. The show was only aired in France and has never been officially released, although bootleg versions have circulated for years and it can often be found on YouTube. Several of the songs featured were re-recorded by the then current live band especially for the show including 'Only Women Bleed', 'I'm Eighteen', 'Billion Dollar Babies' and 'School's Out' and have since turned up as B-sides to singles with crowd noise added to make them sound like live recordings. Others saw the band miming to album versions of the songs. 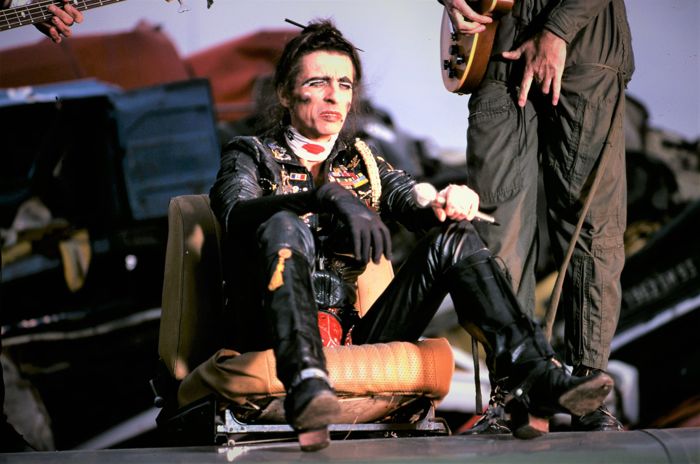 Alice performing 'Under My Wheels' in the Paris Special.

Some songs are filmed live in studio. Others in different places in Paris. 'Goes To Hell' was originally intended to be filmed at Notre Dame Cathedral butthey couldn't get permission so it was eventually done at Sacré-Cœur Basilica. 'Generation Landslide '81' was filmed at the Centre Beaubourg. The clip for 'Seven And Seven Is' has sometimes been used as a promotional video, although it originated as part of the French special. The full track listing is as follows:

* Going by what can be seen in the metro footage it could be 'Porte des Lilas' station. You can see "LAS" on the last part of a sign on the wall (the rest never comes into sight). The station has a hidden platform that isn't actively part of the metro system any more and is used for many movies and TV productions. Only two stations on the Paris metro have names ending in "LAS" and going by photos 'Porte des Lilias' has/had exactly the same type of signs, and also had/has the "Sortie" signs hanging from the roof as seen in the video. However this is just my guess.

The end titles are a little strange as the producers decided to use the bands full names rather then the ones they are usually know as. Hence we had Duane Hitchings: Synthesizers, Carlos Michael Pinera: Guitar, Eric Scott Pilipowitz: Bass, John Raymond Nitzinger Jr.: Guitar and Joannaro Unvena: Percussion.