Alice Cooper has been announced as a guest at this years ‘London Film And Comic Con‘ at the Olympia, London between July 24th and 26th. This is NOT a concert, but an autograph and photo appearance. Tickets for the convention are on sale now, but getting an autograph and/or photo will cost a LOT more on top of your admission price. Prices quoted are an eye-watering £65 for an autograph and $75 for a photo, or a "diamond pass" that gets you an autograph, photo and "gift" for £175. Alice will be there all three days and tickets are available now.

‘Live From The Astroturf, Alice Cooper’ is getting another UK showing at the ‘Manchester International Film Festival‘ which runs between March 7th and 15th. The film will be shown on Saturday March 14th at 7.45 at the Odeon, Great Northern.

Blue Coupe will be back in Europe for the Silja Rock Cruise from Stockholm to Helsinki on May 18th. Hopefully there will be more European shows announced soon.

Alice and Sheryl were at former elementary school Westwood High School in Mesa, AZ on Wednesday to announce that there will be a second ‘The Rock’ Teen center opening there this summer. ‘Alice Cooper’s Solid Rock Teen Centers’ will fund the renovations and provide more than $100,000 worth of music, arts and dance programming to youth ages 12 to 20 and the local community.

The Goon Squad (the Alice Cooper band without Alice and Nita) will be playing an "After Show Party" at ‘Frankie’s Pizza by the Slice’ at 50 Hunter Street, Sydney, Australia on February 15th. This takes place after the proper Alice Cooper show at Quodos Bank Arena.

Blabbermouth have posted video of Nita Strauss at NAMM last weekend which you can check out here. Nita is currently working on her second solo album between AC tours.

Alice’s appearance on ‘Jonesy’s Jukebox’ this morning is likely to be posted on the radio stations site soon so keep an eye out here.

It’s been confirmed that the ‘Fight Fire Australia’ charity show in Sydney next month WILL be televised by the ‘Seven’ and ‘Foxtel’ channels in Australia. The full nine hour plus show will be shown along with backstage footage and interviews. 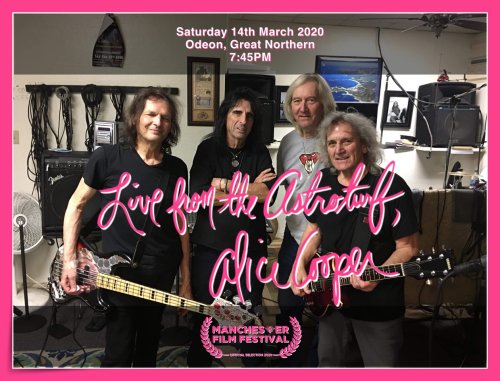