Alice Cooper back on Tour

Well, the US tour is up and running and already Alice and the band seem to be firing on all cylinders. As expected this is the same basic stage show as two years ago before the pandemic cut the touring short, but there are three new songs from ‘Detroit Stories’ slotted in during the first half of the set. Lots of videos have appeared on YouTube already of course. The tour is under very strict covid rules with regular testing, masks and distancing (no guest passes/Meet and Greets’s etc) while offstage so we can only hope they continue to stay safe and well for the full tour.

Away from the tour the Detroit street that is being named after Alice has been finalised as “Alice Cooper Court” at Eloise Asylum (30712 Michigan Avenue) in Westland, Michigan. The official unveiling will take place on Thursday September 23rd at 2pm and will be hosted by WCSX DJ Big Jim O’Brien. The ceremony will also feature an appearance by tribute act ‘The Nightmare’.
For anyone is interested you can find out more about the Eloise Asylum on Wikipedia. It certainly seems an apt location for Alice Cooper Court!

Alice’s appearance at the London Film and Comic Con in November has unsurprisingly been cancelled (again). However it seems that currently no refunds are being offered as they are trying to re-book Alice for a later date.

Alice and Rock & Brews restaurants have launched a ‘Poison Burger’ which features Alice’s branded ‘Poison Reaper’ hot sauce. Alice has recorded a short promo for the burger and you can see that, and see if there is a Rock & Brews Burger joint near you (US only), on AC.com.

Atlantic City Weekly has a new interview with Alice, but it’s blocked outside of the US. Luckily AC.com have you covered for this as well so you can read it here.

Chuck Garric posted a short video to facebook, saying he’s just finished recording Alice’s vocal for a new Desmond Child (Trash/Hey Stoopid etc) song while on the road. This could be for Child’s solo album which Child first talked about a long time ago, or maybe it’s for something different! Chuck, of course, is an experienced recording engineer, and records the Alice’s chat for the ‘Nights With Alice Cooper’ radio show while they’re out on tour.

‘Brutal Planet’ is being released again on double vinyl by eONE, mastered at 45rpm for the first time. It’s due out on November 26th as part of the Black Friday Record Store Day and comes on “color in color” vinyl.

Ryan Roxie sat down ‘In The Trenches‘ with Ex-Coop Eric Dover for a long chat last week which you can check out here. He also posted a ‘Tour Kick Off‘ episode with several clips from the pre-tour rehearsals. Next up on Friday at 5pm (UK) Ryan will be chatting to Glen Hughes and Doug Aldrich of The Dead Daisies.

Lastly Wes Payton has a book out which features a rock star character which, as a fan, he naturally based on Uncle Alice. It’s called ‘House Painter Pirate Hunter’ and you can find out more on AmazonUS or AmazonUK. In the UK it’s free if you have KindleUnlimited. 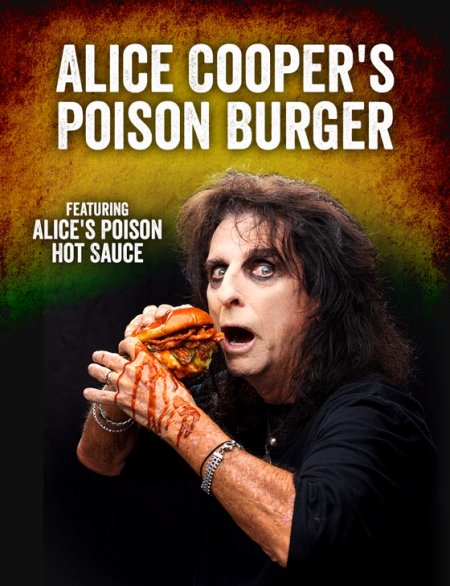