A new show has been added to the October tour in the US. Alice Cooper will play the Dollar Loan Center in Henderson, NV on October 8th.

‘Creeper‘ have been announced as the opening act on next months UK tour with The Cult. They’re a goth/punk/emo band from Southampton who have been building a substantial following over the last few years.

There’s also a new interview from the Yorkshire Post which you can check out here.

The last few nights of the US tour saw a few unusual events. Tommy missed three shows, presumably due to illness (I’ve not seen the reason posted) but was back for the final Greek Theater show, and Nita Strauss has been seriously in the wars, after "…struggling with a bit of knee pain on and off the past couple weeks, it all finally came to a screeching halt on stage last night [April 22) when I stepped off the castle stairs and my right knee went POP! Definitely some of the most overwhelming pain I’ve ever had in my life." She managed to finish the show with her knee heavily strapped up before heading for the ER for tests. Nita soldiered on to finish out the US dates and has since had more treatment and been cleared to play her scheduled solo dates over the next few weeks, although you probably won’t been seeing her tearing around the stage quite as much as usual for a few weeks!

Music Connection has a long review of the final LA show the other night including so great photos.

‘No Cover’ episode 3 is now up on YouTube as four more hopefuls play for Alice and the other judges for a chance at the top prize.

The Akron Beacon has a cool new interview with Neal Smith, talking about his childhood growing up in Akron, OH.

German tour posters are advertising the release of a ‘Live EP” version of ‘Live From The Astroturf’, the recording of the original band’s 2015 reunion at Good Records in Dallas, TX, which is to be released on August 26th. No more details as yet.

Alice has been signed up to be a character in HypGames‘ ‘Ultimate Golf’ at some point in the future. The mobile golf simulator is available to download now but it’s unclear when Alice will make an appearance.

The first two episodes of ‘No Cover’ are now available to watch via YouTube. The shows see Alice, Lzzy Hale and the other judges watching the first batch of diverse acts and deciding who to send on to the later rounds of the competition. New episodes will be released every Wednesday evening.

Alice has had a bit of UK press in the last couple of weeks. Firstly he turned up in the Daily Express magazine on March 19th, and then last weekend he was in the Sunday Times magazine, both being fairly generic interviews. He’s also in the latest ‘Classic Rock’ magazine which celebrates the mags 300th issue.

Jason Becker has posted a video of Alice chatting backstage about legendary guitarist Steve Hunter as part of his ‘Grateful Greetings’ video series.

Blue Coupe with Dennis Dunaway are back in action playing the Can-AM Festival in Sackets Harbour, NY on July 16th, ‘Under The Neon Palms’ at El Mocambo in Toronto on July 21st, and The Casbah in Hamilton, Ontario on July 22nd with more dates to come.

Ryan Roxie was on the ‘Talk Louder‘ podcast this week which is co-hosted by Jason McMaster of Dangerous Toys (remember their Alice tribute song ‘Scared’) and you can find that on YouTube. This one is over 2 hours long! 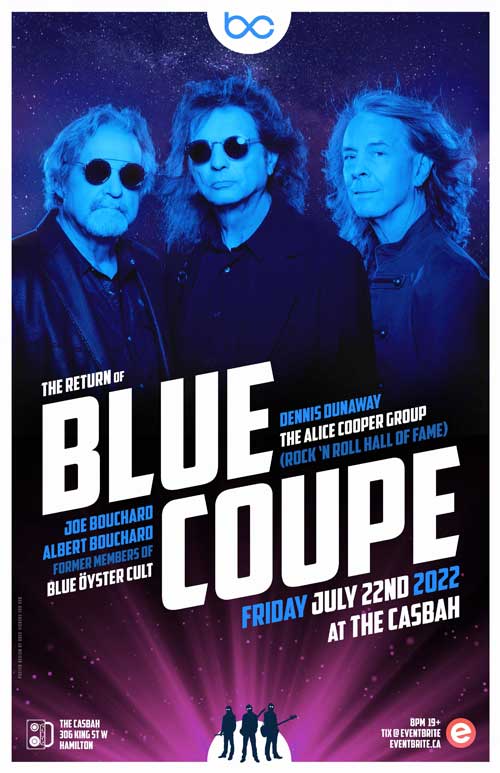 ‘No Cover‘, the new TV talent show Alice filmed last year, now has a trailer and official release date. Season one will launch on April 20th exclusively on YouTube, Recorded at the legendary Troubadour club in West Hollywood the new show is a rock’n’roll equivalent of the seemingly endless pop talent shows, the difference being all the acts play live and perform their own material. Alice judges along side Lzzy Hale, Gavin Rossdale (Bush), Bishop Briggs and Tosin Abasi.

Arizona will be releasing Alice Cooper car number plates in the near future. The specialty plates will cost $25 per year for the driver, $8 of which is an administrative fee. The remaining $17 per plate per year will go to Alice’s ‘Solid Rock’ charity.

Beasto Blanco, featuring Chuck Garric and Calico Cooper, have announced a week of shows in July. The dates are as follows:

The Edmonton Journal have a review of the recent show at the Jubilee with a few photos.

Alice Cooper has announced more North American dates for September with pre-sales beginning tomorrow. The full list is as follows:

Metal Department have released a 1 track 10″ vinyl single of ‘Welcome To My Nightmare’. This is the 2010 ‘Alice Does Alice’ re-recording originally meant for games like ‘Rock Star’ and has only ever been available in digital form before now. The singles comes on 10″ black vinyl and is limited to 500 copies at a pretty hefty price tag for just one track (especially when you add the postage!). You can order now here. 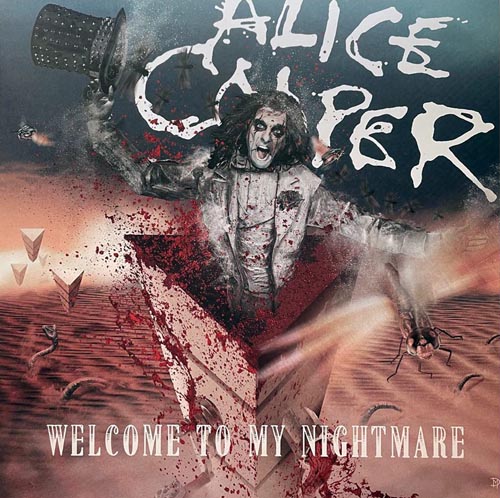 Alice Cooper and Nita Strauss are both confirmed as playing the Blue Ridge Rock Festival at the Virginia International Raceway on September 8th. Tickets are on sale now.

"I got to know #TaylorHawkins thru both the Foo Fighters and his band Chevy Metal and was blessed to share the same stage with him a handful of times. Taylor drove both bands like a semi truck. There’s no one else like him. He was one of the great characters in Rock N Roll, beloved by all who knew him, and certainly one if the greatest drummers of his time. My band and I are devastated by this news and we will truly miss him. Much love from us to the Hawkins family and to the Foos and Chevy family."

The Davenport Gazette has a new short interview with Alice promoting the local show.

Dennis Dunaway has also been busy with interviews with long chats with ROX TV’s Carrie-Anne Grove, and Stefen Adika.