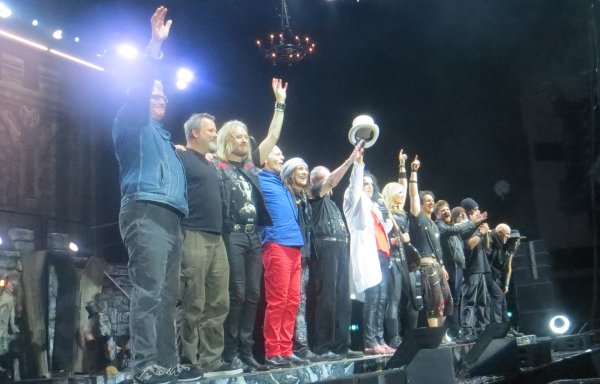 And so another UK tour comes to an end with an epic show in Cardiff, which closed with a stage invasion by the opening acts! What a week it’s been. MC50 and the legendary Stranglers offered the best support we’ve had in many years, highly entertaining and surely gaining new fans every night, but of course no one can top The Coop and the best live band in the world who tore up the stage despite tiredness setting in from a long tour. What a set list, and what a show! We even had Dennis Dunaway join the band in Brighton and London!
As always a few thank you’s before we get to all the news from the last 10 days. To Alice, Sheryl and the band (Roxie, Tommy, Glen, Nita, Chris, and Chuck) who always give 110% at very show. To Bujie, Kyler, Amber, David and all the backstage team and crew without whom there would be no show. To the great Toby Mamis who always comes through for us to make every tour unforgettable. To Andy Michael for his help, and of course all the Sickthings whose company, as always, has been the very best! Couldn’t do it without you all, and here’s to next time!
UPDATE: Photos from all shows now up in the Photo section.

So… on with the news!

As I quickly posted yesterday we sadly lost Erik Scott a couple of days ago. In my limited interaction with Erik he was always generous with his time and it was fascinating listening to his stories from the ‘Special Forces’ years which he told with affection and pride. He’ll be missed, and of course the Sickthings community sends their condolences to his family and friends. His music will live on.

Back to the UK tour and the big shock was that Chuck Garric only played the first show in Manchester! Couldn’t believe it when he told us afterwards that he would be heading home, as he had the Beasto Blanco Megacruise show to prepare for. We missed you Chuck! In his place we had Hollywood Vampire’s super-bassist Chris Wyse standing stage left, who did a excellent job filling in on short notice for the last six shows. Chuck will be back in the band for the next run of shows in the USA, and Chris will be back with the Vampires next year (hopefully!)
Speaking of the Hollywood Vampire’s they’ll be back on ‘Late Night With James Corden’ on Halloween night, when the show will air the second song the band recorded a few months ago when they last appeared.

A couple of enterprising fans did their best to promote the UK shows, including the bus driver in Aberdeen who wore full Alice makeup the evening of the show, and the enterprising London Underground worker who put this up in honor of the master! (Thanks Mercy for photo) 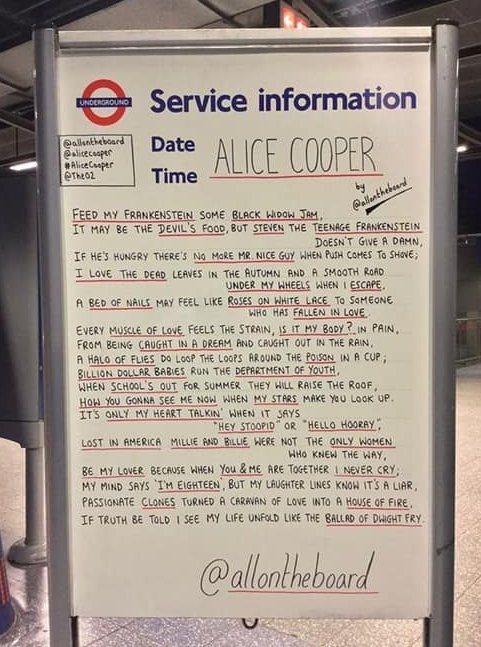 The Aberdeen Evening Express had an article about AC fan Carol McLean and the Aberdeen show.

There’s been lots of reviews from the UK shows as well. Check out Purple Revolver, The Guardian, Manchester Evening News, Aberdeen Press and Journal, Society Aberdeen, The Argus, Arts Desk, Brighton News, The Express, The Up Coming, Financial Times (subscription), and Express and Star.

And there’s a few new interviews in The Metro, The Telegraph (may need to register), and Express and Star.

Also check out a new interview with Glen Sobel at ‘That’s My Gig‘.

The Daily Mail caught Alice and Sheryl out and about in London and seem surprised he wasn’t in full stage costume!

This years ‘Record Store Day Black Friday’ on November 29th has a couple of Cooper related releases to look for. First is the release of the 1973 Houston, TX show which comes on one LP and one 7″. This was previously released on CD as part of the ‘Billion Dollar Babies’ Deluxe reissue some years ago, but this is the first time it will be on vinyl. It’s being released by Rhino Records but there’s no info on how many will be pressed yet.
There’s also a new vinyl version of ‘Dragontown’ on 2xLP coloured vinyl. This is a limited edition of 1500.

As previously mentioned both ‘Live From The Astroturf, Alice Cooper’ and ‘Cold Cold Coffin’ will be shown at during a special evening at Theatre 80 St Marks in New York on August 14th. More details on the event have been announced.
Each film showing will be followed by a brief Q&A, Calico Cooper will be doing a special performance to “Cold Cold Coffin”, and then Chuck Garric and Calico will perform their Beasto Blanco version of ‘Feed My Frankenstein.’ Guitarist extraordinaire Ryan Roxie will also be there playing along with Dennis Dunaway and ‘Snake Charm’ featuring Nick Didkovsky and Russ Wilson with background vocals compliments of the Darlings of The Demented, Tish and Snooky of Manic Panic fame. Signed Calico Angel posters and ‘Snakes! Guillotines! Electric Chairs!’ books, as well as some rare memorabilia will also be available for purchase. You don’t want to miss this one if you can get there. Tickets are available now.

It’s no surprise that Lzzy Hale has joined the band during ‘School’s Out’ a couple more times this week, but in Cedar Park, TX they were also joined by Hollywood Vampire Joe Perry, presumably on route to meet up with the rest of the Vampires for the ‘Late Late Show’ performance the following night.
The TV performance was perhaps a little disappointing, in that the band only performed ‘heroes’ again, as with their last TV appearance. There was also a short skit at the beginning of the show, with Alice showing Joe and Johnny the chords to the song in the dressing room, but no interview or other content. A short video posted by Glen Sobel showed they also played ‘I Want My Now’ so maybe that will show up sometime later.

Goldmine Magazine has posted their feature on the original band which has quotes from Dennis, Neal and Michael about the split and reunions.

Alice will be a guest at the BottleRock festival in Napa Valley, CA which runs between May 24th and 26th. However he won’t be performing at the festival… rather, it appears he will be a guest on the ‘Culinary Stage’ which seems to be a bunch of chef’s and celebrities cooking while people watch… Limited tickets are available now.

Calico Cooper posted a message on facebook reporting that her stage baseball bat, ‘Suzanne’ was stolen at the Denver Beasto Blanco show on April 23rd. Here’s the full message. If you can help let her know.

Dear Denver-
We have a thief among us. Last night my bat was stolen from the show. We have a pretty good idea of the guy who took it, but we want to give them the chance to do the right thing before we take further action.
My bat “Suzanne” has been with Beasto since we started. It’s been the same Bat in all the videos, stage shows, and photos. It means a lot to me.
We all Make mistakes. We all drink a little too much and make a bad call, but here’s your chance to make it right before it gets worse. Please return the bat, no questions asked by us, to MUDHEN MERCH, 7190 W Sunset Blvd. #1093, Los Angeles, CA. 90046.
To the rest of the fans that came last night, thank you for an amazing show, for being a spectacular crowd, and if you see you know who with Suzanne, do what you need to do.

The new issue of Goldmine Magazine has a 6 page feature on Alice Cooper including interviews with Neal, Michael and Dennis separately answering the same questions including their thoughts on the original band split, the early days and the recent get togethers. It’s a good feature and worth checking out. It’s the June issue you want with ‘The Zombies’ on the cover (with Alice Cooper listed a the bottom).

Glen Sobel and the Goon Squad (Glen, Chuck, Tommy and Ryan) will play a ‘pre-show’ at Sub Alpine Club in Turtle Creek, PA on July 18th (the night before the Pittsburgh show). Tickets are on sale now from “Sub Alpine Club, Attic Records, Dave’s Music Mine, Record Connection (Niles, OH), Anthony Lamonde and the Borstal Boys and Lily V. Sixx” or by phone on 330-219-0016. ‘The Borstal Boys’ open and you can see the flyer below.

Dennis Dunaway will be a guest at the ‘School of Rock’ event at Full Moon Resort in Big Indian, NY (Nr. Woodstock) on July 3rd. Dennis will be speaking and sitting in with the young musicians during an Alice Cooper set. This looks like it’s a private event. Also, if you’re going to the Foxwoods Alice Cooper show on July 4th you might want to keep your eyes open for Dennis and Cindy!

When Blue Coupe play Sweden Rock on June 8th they will have a special guest sitting in… Ryan Roxie!

Geeks Of Doom have posted an article about Alice’s recent appearance at the Philly Comic-com with a few photos, and speaking of the recent comic convention appearances ‘Lucifer’ star Tom Ellis posted the photos of himself with Alice at FanX, stating “So it turns out @alicecooper is not only a lovely man he’s also a big #lucifan I am beyond happy.” There is also an article about the FanX appearance at the HeraldExtra, but they won’t let you read it if you live in Europe..