Two more shows have been added to the November US tour. They are:
November 22nd – Tilles Center For The Performing Arts, Brookville, NY
November 23rd – Ocean Resort Casino Ovation Hall, Atlantic City, NJ
Tickets for both go on sale this Friday.

There’s another article on the ‘…Astroturf’ New York event over at My Global Mind with some great photos. There’s also a piece at NJArts if you haven’t already seen it.

Alice turns up in yet another music documentary due out soon. This one is Jon Brewer’s ‘Chuck Berry’ and you can see the trailer, with Alice, on YouTube.

Hollywood Soapbox has a review of the recent Holmdel show under the title “As a live act, Alice Cooper has no comparison”, as if there was any doubt. Glide Magazine has a ton of photos from the Camden show. 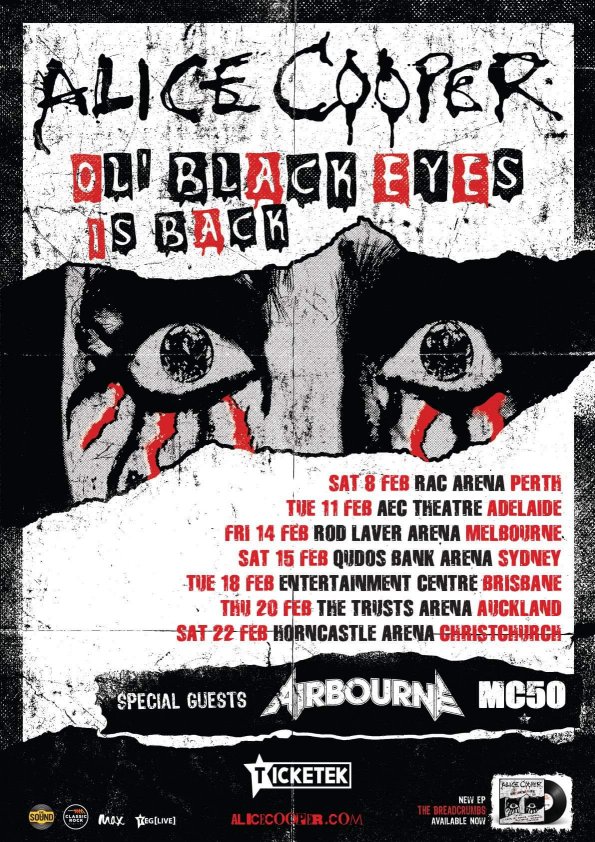 Alice Cooper has announced two more shows during the November US tour. They are:
November 18th – Richmond, KY – EKU Center for the Arts
November 26th – Toledo, OH – Stranahan Theater
Tickets for these shows go on sale this Friday at 10AM local time.

As previously mentioned both ‘Live From The Astroturf, Alice Cooper’ and ‘Cold Cold Coffin’ will be shown at during a special evening at Theatre 80 St Marks in New York on August 14th. More details on the event have been announced.
Each film showing will be followed by a brief Q&A, Calico Cooper will be doing a special performance to “Cold Cold Coffin”, and then Chuck Garric and Calico will perform their Beasto Blanco version of ‘Feed My Frankenstein.’ Guitarist extraordinaire Ryan Roxie will also be there playing along with Dennis Dunaway and ‘Snake Charm’ featuring Nick Didkovsky and Russ Wilson with background vocals compliments of the Darlings of The Demented, Tish and Snooky of Manic Panic fame. Signed Calico Angel posters and ‘Snakes! Guillotines! Electric Chairs!’ books, as well as some rare memorabilia will also be available for purchase. You don’t want to miss this one if you can get there. Tickets are available now.

It’s no surprise that Lzzy Hale has joined the band during ‘School’s Out’ a couple more times this week, but in Cedar Park, TX they were also joined by Hollywood Vampire Joe Perry, presumably on route to meet up with the rest of the Vampires for the ‘Late Late Show’ performance the following night.
The TV performance was perhaps a little disappointing, in that the band only performed ‘heroes’ again, as with their last TV appearance. There was also a short skit at the beginning of the show, with Alice showing Joe and Johnny the chords to the song in the dressing room, but no interview or other content. A short video posted by Glen Sobel showed they also played ‘I Want My Now’ so maybe that will show up sometime later.

Goldmine Magazine has posted their feature on the original band which has quotes from Dennis, Neal and Michael about the split and reunions.