With just a few hours to go before ‘Detroit Stories’ is officially available (presumably streaming from midnight in your region) there’s even more coverage to report before it gets lost.

I’ve already mentioned it, but worth a reminder that Alice will be doing a livestream album launch tonight (2AM UK) over at TalkShipLive. Not exactly sure what it will involve but could be cool.

Alice will be "taking over" radio station Triple M Rock tomorrow at 9PM local Australian time (you’ll have to work that one out yourself) to mark the release of the new record, and they promise Alice "playing his favourite songs and doing whatever he wants!"… so that would be playing golf? It will be available via their website and local DAB radio.

Alice was on BBC radio this afternoon with Steve Wright and you can hear that short interview at around the 2 hours 36 mark here. He’ll be back on the BBC on Saturday around 6.15 on Radio 4 during the ‘Loose Ends‘ show.

Alice, Dennis, Neal and Michael have all recorded material for a show on ‘Foo Fighters Radio’ SIRIUSXM Channel 105 that celebrates the 50th Anniversary of ‘Love It To Death’. Presented by Foos’ Pat Smear and Chris Shiflett it will premiere on March 11th at 2PM ET, with repeats each day for the next week at various times. Unfortunately you need a subscription to hear it.

The new issue of Spanish magazine ‘Ruta 66’ has Alice on the cover and an article inside.

There’s been three (so far) short official videos posted featuring Alice talking about ‘Detroit Stories’ which you can see on YouTube. They are "Rock Hard Capital", "Where’s The Party?" and "The Myth".

There’s also new articles/interviews over at Ultimate Classic Rock (with Alice talking about the Detroit bands that influenced the new album), at Stack HiFI in Australia which will also be featured in their free print magazine next week, Inside Hook, WDET Culture Shift, and an interview video on Yahoo Entertainment.

Fancy a personal 20 minute personal video call with Alice? Then get your credit card out! ‘Sports Dinner Auctions‘ is offering exactly that to one lucky bidder and you have 6 days left to bid.

Ryan Roxie was interviewed on "Fields & Friends" for over and hour the other day and you can see that on YouTube.

Set aside whatever you were going to do this Saturday, February 27th (8PM UK/3PM EST), as the entire Alice Cooper Band invites you to sit in on their live-stream ‘Band Meeting’ as they catch up on what each of them have been up to, and quite possibly drop some ‘Easter eggs’ of what’s coming up in 2021. And by "entire" we mean Ryan, Tommy, Nita, Glen, Chuck AND Alice and Sheryl Cooper! This promises to be a real "one off" event and you can watch it free on YouTube.

Meanwhile reviews of ‘Detroit Stories’ are now turning up all over the place, so if you need to know what a journalist thinks check out: Charlotte Observer, First Post, Metal Hammer, Vinyl Chapters, Riff Magazine, Wall of Sound, and Ghost Cult to name a few. 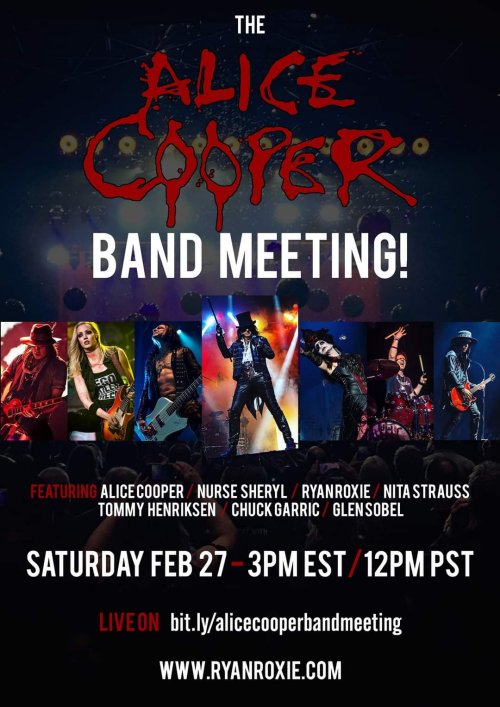 Lots of interviews are appearing now in the run up to ‘Detroit Stories’ on Friday. New ones have appeared at Forbes Magazine, and the Boston Herald.

Alice was also on the BBC 6 ‘Radcliffe and Marconie’ show yesterday morning and you can listen in around the 1.36 mark for the next month or so here.

Alice and Dennis Dunaway have recorded a zoom interview with Keith Roth for Sirius radio’s channel 38 ‘Ozzy’s Boneyard’ which is due to air on February 27th at 11am EST, with repeats at 7pm on March 1st and 9pm March 3rd. The show will apparently also be available on demand.

Alice is on two more European magazine covers, this time it’s ‘Rock Hard‘ from Germany, and ‘Popular 1‘ from Spain.

‘Watchonista‘ have an article about Alice’s collection of watches.

I mentioned a couple of months ago that Sickthing Chris Sutton has a new book on ‘Alice Cooper in the 70s’ on the way. Well, it now has a confirmed publication date of March 28th and can be pre-ordered from AmazonUK with AmazonUS to follow. Below is the official blurb for the book, plus the cover.

"In Alice Cooper In The 1970s, Chris Sutton, explores the story of Alice Cooper the band and the solo performer from the early years through to the end of the decade.

The book features interview material from key figures including Michael Bruce, Dennis Dunaway and Neal Smith from the original band, plus their hired gun Mick Mashbir. Also interviewed are Prakash John, John Tropea and Allan Schwartzberg from the solo years, and Ernie Cefalu, whose company Pacific Eye and Ear designed the album covers Several other musicians, concert promoters and even the band’s first roadie have also contributed their thoughts.
All of the albums and singles from Don’t Blow Your Mind, until From The Inside are examined in detail, along with related archive releases and songs that didn’t make the cut.
An essential guide to Alice Cooper in the decade the band helped to define." 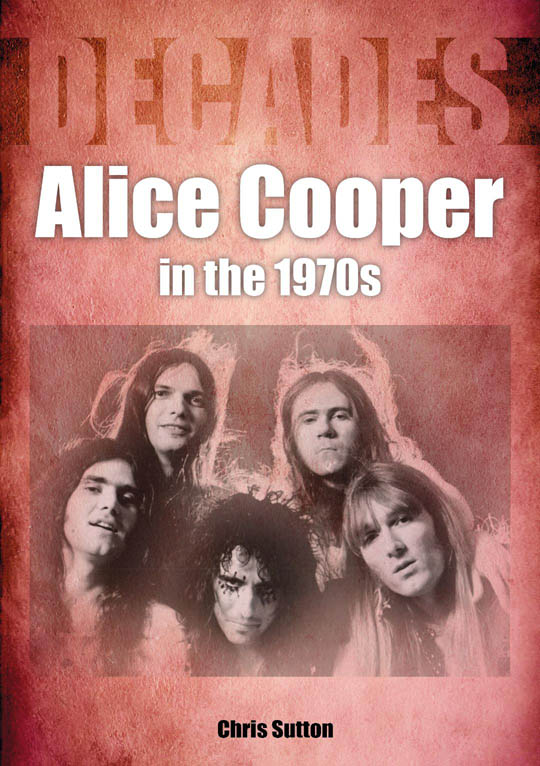 Things are definitely gearing up for ‘Detroit Stories’ now with several new interviews appearing including The Independent, Noise11 (video), Metal Hammer (In the new issue), Pasadena Weekly, Kerrang!, and Kansas City Pitch. Alice was also on Australia’s ‘Studio 10’ yesterday for a short interview which you can see here or embedded below.

There’s a new two minute promo video for the album which features a short clip of ‘Shut Up And Rock’ along with Alice chatting about the album. In fact there are 30 second preview clips of the whole album up now at MediaMarkt in the Netherlands if you just can’t wait another week.
UPDATE: Just after posting this an official preview of the album appeared here which I’ve also added below.

According to TalkShopLive it appears Alice will be launching the new album online with a livestream interview on February 25th (2AM on the 26th UK time). It appears to be free so don’t miss it!

The news of Alice and Sheryl getting vaccinated has been covered pretty widely. AZ Big Media has a different photo and a couple of AC quotes.

Chuck Garric was interviewed by Czech site Frontman.cz which Google translates here. It’s not the greatest translation (Alice seems to change sex in the course of a sentence) but you get the gist.

One I missed earlier is a short interview from Phoenix restaurant ‘Los Sombreros’ on Alice’s birthday from AZTV7 with updates on the new Teen Centre in Mesa, AZ.

Detroit to have “Alice Cooper Court”

With just two weeks to go until ‘Detroit Stories’ things are starting to move. During an interview with Detroit station WCSX it was announced that Alice will be getting his own road somewhere in the city called "Alice Cooper Court’. Host Jim O’Brien announced the news as a special birthday present to Coop. The exact location is yet to be decided and they are running a competition to choose the right spot.

There’s a new Alice interview in Spin magazine, and AZCentral has a video of Alice confirming that he and Sheryl have now been vaccinated against the Covid virus, having contracted it themselves late last year. German magazine ‘Rocks‘ (which looks very much like a version of the UK’s ‘Classic Rock’) is another European mag to have Alice on their cover this month.

Variety has a short article about being sober in the music business and it has a few quotes from Alice.

Dennis Dunaway is the star of a new advert for RotoSound strings which should be appearing in musicians magazines any time now. You can see the advert below. DD is also interviewed by Max1on1 which is available via Facebook.

Ryan Roxie’s latest ‘In The Trenches’ guest was ex-Alice keyboardist Teddy Zig-Zag, and you can watch what happened here.

Nita Strauss is featured on the January cover of ‘Recovery Today‘ magazine, a "Addiction, Sobriety and Recovery" magazine.

Glen Sobel is interviewed by North Wales Drum Productions which you can watch on Facebook.

Lastly there is a new movie due out on digital platforms in a couple of days called "School’s Out Forever". It’s a comedy horror film which looks amusing, and while the trailer doesn’t feature the song there can be little doubt where they got the title from, so surely it will play at some point? 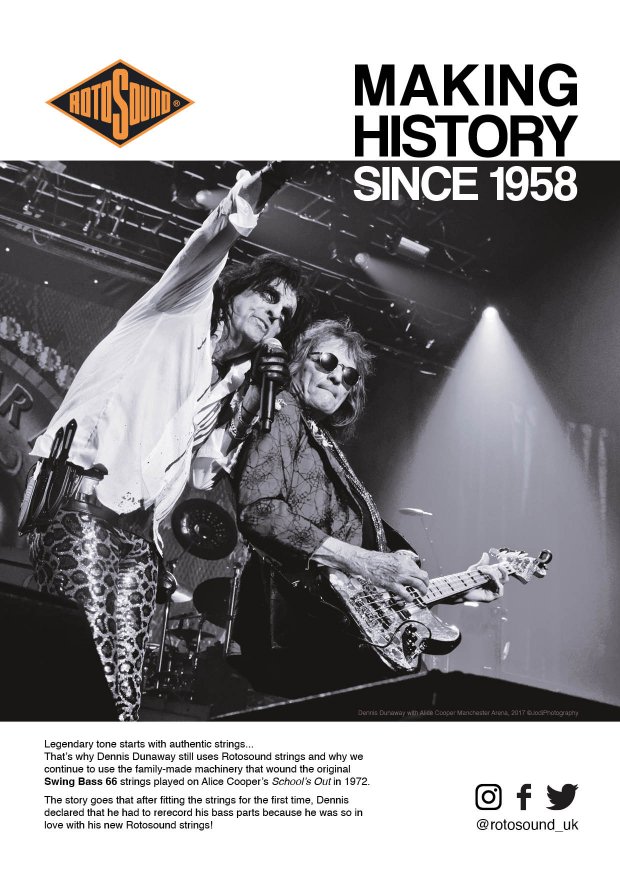 This morning Alice marked his birthday with the third “single” from ‘Detroit Stories’ which appeared on the official Alice Cooper YouTube account. Written by Alice, Bob Ezrin and Neal Smith, and with an obvious tip of the hat to ‘Elected’, it features original Cooper band members Neal, Dennis Dunaway and Michael Bruce on drums, bass and guitar respectively. ‘Detroit Stories’ is due February 26th, although I’ve heard reports that Amazon in the USA is notifying people who pre-ordered that the special edition box set has been delayed by a week.
UPDATE: You can officially download the song for free here.

In a new interview this week with EW it’s revealed both Alice and Sheryl Cooper were diagnosed with COVID-19 in late 2020 but that both made a full recovery: “We had it at the same time, which was great, because we could commiserate.”

Alice turned up on a new ‘advert’ for Uber Eats, the food delivery. Alice appears twice in the two and a half hour(!) video which features Mike Myers and Dana Carvey, as Wayne and Garth from ‘Waynes World’, watching a list of all the Uber Eats restaurants scroll past on screen, and occasionally doing something amusing. You kinda need to see it to understand, which you can do on Youtube here. This link should take you to Alice’s first appearance, with him turning up again around the 2.20 mark near the end.

Other new interviews have been appearing in the European music press. Alice features on the front covers of ‘Hard Rock’ in both Italy and France (presumably translations of the same article) and ‘Rock and Folk‘ in France. There’s also an article in the new issue of ‘Uncut‘ in the UK.

‘Talkulture interviews drummer Glen Sobel for an hour or so which you can see on YouTube.

Dash Cooper and CO-OP have a new single out. It’s called ‘Lie To Me’ and can be found here, and apparently features a guest appearance from Tommy Henriksen.