Celebrating the release of his new album, Detroit Stories, Alice will hit the road starting September 17th in Atlantic City, NJ with stops in Boston, Chicago, Detroit, Nashville and more – culminating in a performance at the 2021 Shaky Knees Festival in Atlanta!
VIP Tickets and Presales available tomorrow, Tuesday, May 18th at 10am local time with code SICKTHINGS. Tickets go on general sale this Friday, May 21st at 10am local time. 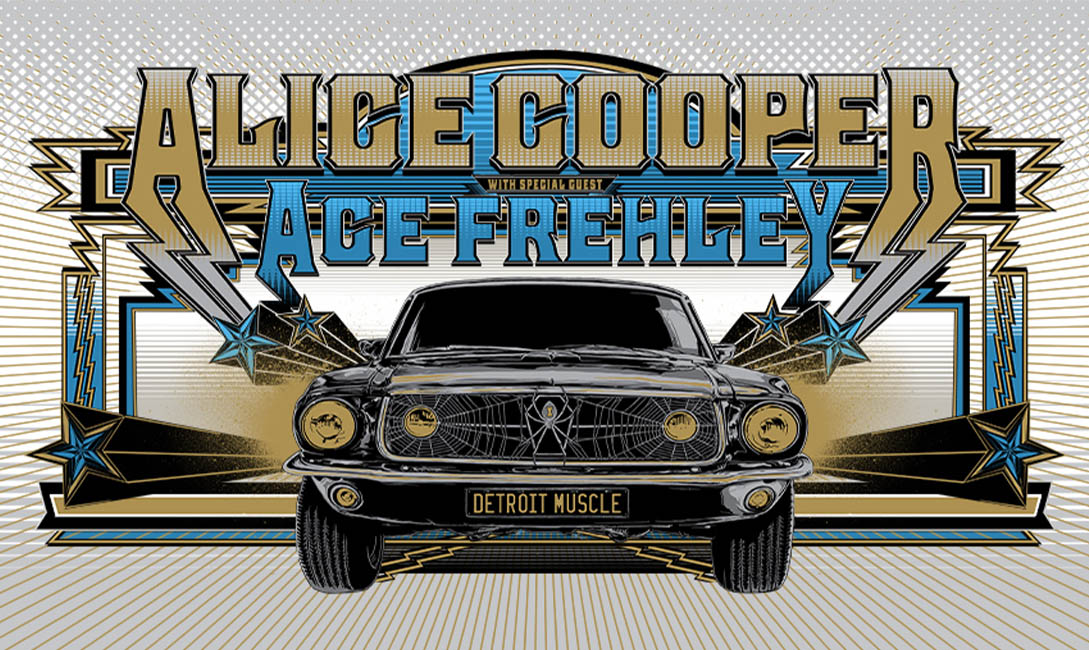 In other news Alice turned up on the BBC News channel during the week promoting ‘Detroit Stories’, which you can currently watch here.

Alice can also been see on the ‘Word On Woodward‘ podcast talking about ‘Go Wings Go’, and there’s another new interview over at ‘Page Six‘

Another news story that has been all over the place in the last few days is that the Andy Warhol “Little Electric Chair” print Alice found in his garage a while back is going to be auctioned by the Larsen Gallery in Arizona. So if you have a few spare millions sitting around, here’s your chance! The gallery has placed an estimate on the print around $2.5 million to $4.5 million!! A percentage of profits will go to Alice Cooper’s Solid Rock charity. – AZCentral also has a report.

Dennis and Cindy Dunaway’s appearance on the Alexxis Steele Podcast can be seen here, but make sure you put aside some time to watch it all as it’s nearly 2 hours long!

A couple of weeks ago Alice Cooper and Dennis Dunaway appeared on Keith Roth’s ‘Electric Ballroom‘ show, but unless you managed to listen in live (difficult with the US/Europe time differences) you missed it, as it hasn’t been posted online… until now. Courtesy of Electric Ballroom Radio and Keith Roth, below you can listen to the show which originally aired  April 25th 2021.

Alice was on BBC Radio 6’s Liz Kershaw show recently and they have posted video of the interview over on facebook.

He was also interviewed on the ‘Metal From The Inside’ podcast which you can watch on YouTube.

Alice has been announced as a guest at this years ‘Geek’d Con‘ in Shreveport, LA between August 13th-15th. Tickets are on sale now.

Dennis and Cindy Dunaway will be on the Alexxis Steele’s ‘Music 101’ show tonight (May 10th) at 9PM EDT which you can watch live at YouTube. Presumably it will be available to watch on their channel afterwards.

One to watch for in the future: Bank Side Films are in post-production on a new film called ‘Dali Land’ which "tells the story of the later years of the strange and fascinating marriage between the genius Salvador Dalí and his tyrannical wife, Gala. Set in New York and Spain in 1973, the story is told through the eyes of James, a young assistant keen to make his name in the art world, who helps the eccentric and mercurial Dalí prepare for a big gallery show." Of interest to us is that they DO plan to feature Alice Cooper and the famous Hologram, with actor Mark McKenna playing Alice. You can keep track on this here.

Alice Cooper has just released a new video for ‘Go Man Go’ from ‘Detroit Stories’ but with revised lyrics reflecting his love of Detroit Red Wings hockey team. It’s called ‘Go Wings Go‘ and you can see it below. Obviously Alice is well known as a sports fan having been sighted at baseball, football, and hockey games in the past, not to mention a few boxing matches. Can’t help wondering of his actual home town of Phoenix, where he grew up, started a band, and has lived most of his life, is feeling a little unloved recently!

Also newish is a ‘bonus episode’ of the ‘Alice Cooper’s Vintage Vault‘ podcast with Alice talking to William Shatner on ‘Nights With Alice Cooper’.

Alice turned up on CBS Detroit’s ‘Michigan Matters’ for a short zoom interview which you can watch here and there’s an interview in the Detroit Free Press.

‘Autoweek‘ has a story about Alice’s old 1963 ‘Studebaker Avanti’ which was apparently previously owned by a KGB spy!

Dennis Dunaway makes an appearance on Lydia Lunch’s podcast ‘Lydian Spin‘ around 20 minutes into the show. Lydia Lunch has frequently covered ‘Black Juju’ over the years in her live shows and it’s featured on her album ‘Shotgun Wedding’ from 1991.