Alice has been talking to Arizona Central this week and chats about how he and the family are dealing with the current virus situation. During the interview he also reveals the title of the next studio album. The new album is called ‘Detroit Stories’ and features songs about or inspired by the city. We already know that Michael, Neal and Dennis have recorded parts for the album, and from the ‘Breadcrumbs EP’ we know that it also features various Detroit musicians which he also confirms. No release date yet but it’s getting closer!

Ryan Roxie’s latest ‘From The Trenches’ podcast features a great interview with Dennis Dunaway which is well worth watching. Dennis tells lots of stories from the early days and talks bass for over an hour and you can watch it here. There promises to be a "part 2" in the future too!

During his short livestream show the other night Roxie also announced a new project called the ‘System-12 Guitar Method’. This is a "fresh new approach to learning guitar that differs substantially from the more ‘traditional’ methods that have been taught in the past. This new ‘system’ for learning guitar is easy to understand, filled with guitar ‘life-hacks’, and focuses on the most important techniques and theories to get one playing songs and riffs faster than any other learning method out there." You can learn more and get onboard early via this Kickstarter campaign page, where you can pledge as little as $10 for various perks.

Alice is also getting into podcasting with a new one called ‘Alice Cooper’s Vintage Vault‘. The podcast features Alice talking about a subject with clips from interviews conducted for the ‘Nights With Alice Cooper’ radio show over the past 16 years. The first show is all about Slash!

I didn’t think there was very much to report this week thanks to the current Coronavirus situation, but I seem to have found a fair amount including a few links to entertain you while we get through this mess.

Sadly Beasto Blanco have had to postpone the last few dates on their current tour. They hope to reschedule the dates later in the year.

Alice sent an email to Rolling Stone in which he confirmed he will be spending the enforced time off caused by the postponed shows to finish off the new Alice Cooper album. No more details yet of course, and just because it’s nearly finished doesn’t mean they will change any planned release schedule and put it out any earlier, but it’s good to know it’s getting closer. Read the full article here.

If you’re looking for something to kill a couple of hours Ryan Roxie has been busy making podcasts. In the first he sits down with bandmate Tommy Henriksen for an interesting chat about Tommy’s career including lots of AC info, and in the latest (today) he interviews Billy Idol/Atomic Playboys guitarist Steve Stevens. The Tommy podcast is already up on Roxie’s YouTube channel and the Steve Stevens one should be there soon as well.

Nita Strauss has been chatting to Kerrang! about working for Alice, and her solo career, which you can read here.
Nita is also taking part in a cool new project put together by Dave Ellefson of Megadeth, called ‘School’s Out!‘. The idea is to help entertain youngsters during the virus crisis by offering "free music lessons and one-on-one mentoring sessions via Skype from major artists to students stuck at home due to COVID-19 restrictions." It’s free, and students aged 18 and under can sign up to get a call. The list of artists also includes former Alice Cooper drummer Jimmy DeGrasso along with various other Megadeth related musicians and friends. Nice one Dave!

There’s a short interview with Dennis and Cindy Dunaway at the Manchester, UK ‘Astroturf’ showing last week. I couldn’t be there but it seems to have been a great success.

The Fire Fight Australia charity show has spawned a double album featuring performances from the concert. It’s out now, and features Alice and the band performing ‘School’s Out’ at the show.

Kerrang! magazine have an article ranking every Alice Cooper album from worst to best. Their order is a little odd to say the least but you can check it out here.

Go Tech Daily have a longish article about the ‘Welcome To My Nightmare’ album, however it’s obviously been google translated or something, as you get classic statements like "Bob had labored with us on every single album from ‘Adore It To Demise’ to ‘Billion Greenback Infants’" I must have missed those albums! Maybe worth a read just for a laugh.

Lastly for now the ‘Alice Cooper Solid Rock Teen Center’ is to broadcast a series of concerts on Facebook between March 23rd and 27th featuring different performers each day from the teen center, and "some other surprises". You never know who might show up at some point! Check it out via facebook.

“We are regretfully postponing our Spring 2020 headline North American tour from March 31 through April 22. The tour is being rescheduled for Fall 2020 and the new schedule will be announced as soon as possible.”

“Due to the current concerns regarding COVID-19, the health and safety of our fans, local venue staffs, as well as the health and safety of our band and crew, is of utmost priority. Information regarding previously purchased tickets and VIP packages will be available soon at alicecooper.com; it is recommended that those who have tickets should retain them, as they may be valid for the re-scheduled shows.”

“Let’s get through this together and resume rocking later in the year.”

In an update to the current situation on the ‘Rock Meets Classic’ tour, it appears the rest of the German tour has been officially postponed, although at this point it’s not clear if it will be possibly to reschedule the shows any time soon. While the official statement on the ‘Rock Meets Classic‘ site suggests the Frankfurt show is still on, Kyler Clark has posted this morning to say that Alice and the gang are already heading home to avoid getting caught in any possible travel ban, which could effect the next batch of shows in the US.

“We are on our way home after having the Rock Meets Classic Tour cancelled after the Berlin show. We will make it home today, arriving just before the European travel ban makes it much more difficult. For those folks wondering what will happen to our other tour dates – we are in the same boat. As soon as anything happens you will know at the same time we will. It is difficult to predict, but we hope all goes as planned. Get tested for the virus folks so you know you’re not spreading it to vulnerable people! Take the precautions that are recommended, just in case. Wash your filthy hands!”

Obviously this is an evolving situation so make sure you check with your venue before traveling to a show for the foreseeable future. Currently the US shows are still happening but that could change at any time.

Update: The ‘Rock Meets Classic’ tour has now officially been cancelled and will not be rescheduled. You can read the full statement from organiser Mat Sinner at Bravewords.

Alice Cooper has announced two more shows for this October in Mexico with Tesla opening. Tickets go on pre-sale tomorrow at 10AM. The dates are:

With the current Coronavirus situation Alice’s personal assistant Kyler Clark posted the following message for anyone going to the ‘Rock Meets Classics’ shows. It’s probably good advice for any shows for the foreseeable future:

“If you’re planning on going to Rock Meets Classic in Germany PLEASE make sure you confirm that the show you are attending is still going on! They have banned all shows over 1000 people in Bavaria as of TODAY, Show in Berlin tonight still a go but the whole situation is in flux and if you have plans to travel to any show you should make sure you have the latest information! I am not 100% positive which shows have been called off yet as it’s not fully announced or confirmed.”

Damon Johnson has started work on a new solo album, and he’s set up a Indiegogo site where you can pledge money towards the project with various incentives including a home concert or a day golfing with Damon!

Three new US shows have been announced for July. Support comes from Cory Marks and pre-sale tickets go on sale tomorrow at 10AM. The dates are: 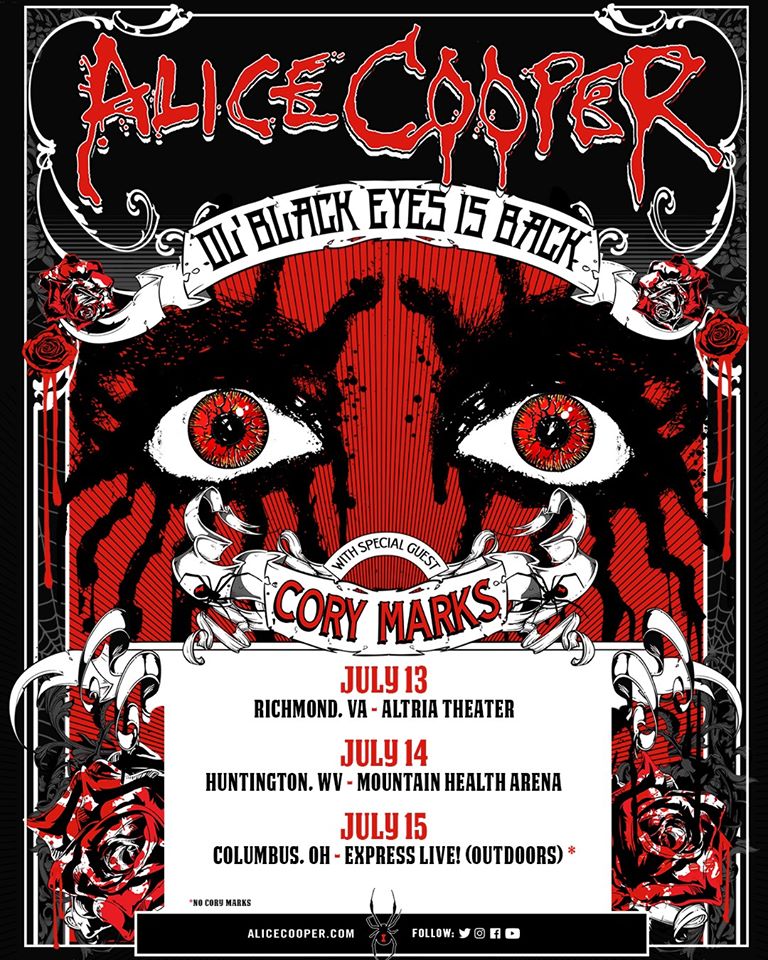 This years Record Store Day is on April 18th and will see the official release of ‘Live at the Apollo Theatre, Glasgow 1982’, a radio recording from the ‘Special Forces’ tour. Only three songs from this show have been officially released before on the ‘For Britain Only’ 12" single back in 1982. It will be a limited edition of 7000 2xLPs on black vinyl. You can see the cover below.

Blue Coupe’s appearance in the Silja Rock Cruise is the latest casualty of Coronavirus. The event has been canceled.

There are still a few tickets for the screening of ‘Live From The Astroturf, Alice Cooper’ in Manchester, UK on March 14th. Dennis and Cindy Dunaway will be there to answer questions and sign things.

Ryan Roxie interviews bandmate Nita Strauss in the latest edition of his ‘In The Trenches‘ podcast.

Meaww have a new interview with Calico Cooper talking about Beasto Blanco and working with her Dad.

Regular readers may remember the Main Man Records tribute to David Bowie ‘Hero’ from a few years ago. The album is the only place to find the Dennis Dunaway Project’s version of Bowie’s ‘Moonage Daydream’, which features guitarist Rick Tedesco playing Mick Ronson’s Les Paul used on the original recording. Main Man are reissuing the album on April 15th on white vinyl and you can pre-order a copy here.

The Lowertown Line has an interesting little video recalling the infamous 1978 tear gas incident at St Pauls Civic Center. Soul Asylum frontman Dave Pirner was there and shares his memories of the show.

If you’re watching the new Netflix series ‘Messiah’ watch out for a cameo appearance from The Amazing Randi! 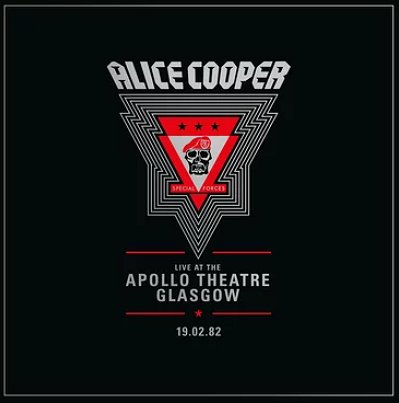