Alice Cooper will play the Töreboda Festival, Töreboda in Sweden on July 9th, stepping in as a replacement for Billy Idol. Sounds like a great deal for anyone already with tickets!

It looks like the Hellfest show on June 24th *may* be livestreamed. The festival certainly has a history of streaming shows live and Arte Concert have already begun streaming shows from this years festival. An official YouTube link did appear but has since gone, but keep an eye on Arte Concert where they are listing upcoming streams from the festival.

Rolling Stone have posted a new video interview with Alice which you can check out here.

Blue Coupe have added a show at Overflow Beer in Ottawa, Canada on July 20th with support from ‘The Uninvited Guests’. Tickets are on sale now.

The latest episode of ‘No Cover’ features a surprise appearance from Nita Strauss to give advice to one of the acts. If you haven’t been following the show it’s well worth it. Check out the latest episode here. They are now open to submissions for season two of the show so it looks like it’s been a success so far.

The video for ‘I Never Want To See Me Again‘ by TBelly, and featuring Dennis Dunaway on bass, has been selected for competition in the ‘London Video Festival’.

Don’t forget the Reelz channel Alice Cooper ‘Story of the Songs’ is due to air this Sunday at 10PM ET. It looks like it includes a lot of familiar faces including a rare appearance by Prakash John! Could be good! 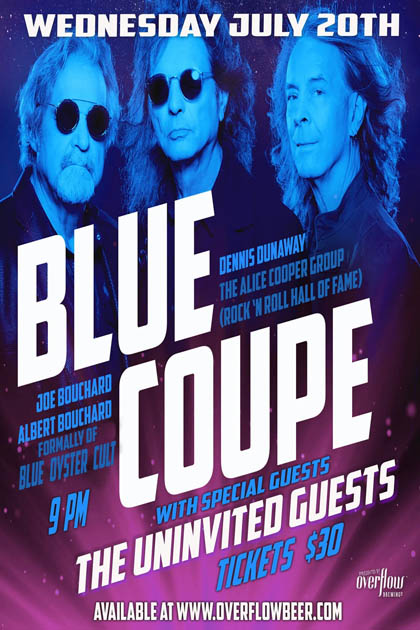